The professionalism and ongoing training of our multidisciplinary team allows us to attend patients with frequent and unusual pathologies in the field of Stomathology, Oral and Maxilofacial Surgery and Otorrinolaringology. We have three types of consultancy: outpatient, hospital, and emergency. 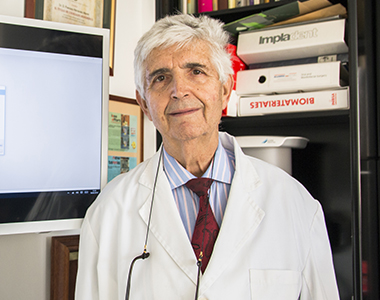 PROF. DR. FRANCISCO HERNÁNDEZ ALTEMIR Professor Dr Francisco Hernández Altemir is a qualified Stomatologist, Oral and Maxilofacial Surgeon. He has a Ph.D in Medicine and Surgery “Development and organization of the cervico-facial confluence with practical aim” that was also published. He is a Founding Member of the European Society of Oral and Maxillofacial Surgery and the Founder of the Speciality of Oral and Maxillofacial Surgery in Aragon. He is an Extraordinary Collaborator Professor at the University of Zaragoza and a Speaker at national and international Conferences. Professor Hernández Altemir is also the Author of ‘‘Medical techniques – increasing worldwide surgery and has several medical patents” (Vibratory ultrasonic surgical instruments, hearth massages devices, surgical gloves, facial mask, suction devices, oral mirror, tracheal canula, etc…) collected in important international magazines, and of “Treatments in the Specialist Area of the Head and Neck”. He has participated in a Residency in the U.S.A. and he is a Member of different Scientific Societies. He is referenced at The Marquis Who´s Who Publication Board in The Nineteenth Edition 2002 of Who´s Who in the World, and in The Who´s Who in Medicine and Health Care Third Edition 2000/2001 and Who´s Who in Finance and Industry Thirty Second Edition 2001/2002 until now, published by The American Biographical Institute, Inc. United States of America. It is Dr. Hernández Altemir one of thet first in using the ortopantomography in Stomatology, Oral and Maxillofacial Surgery (being the first in the country to obtain the needed equipment). 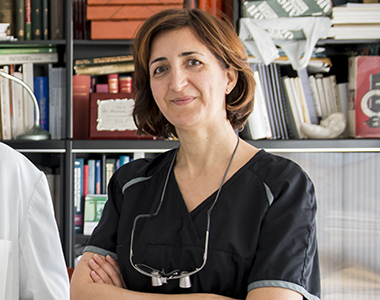 PROF. DRA. SOFÍA HERNÁNDEZ MONTERO Doctor Sofía Hernández Montero gained her qualifications in Medicine and Surgery at the University of Zaragoza. Given her great interest for technology she decided to study a two years Masters in Biomedical Engineering at the Superior School of Industrial Engineering and obtained the highest grade in her Final Project which was entitled ‘‘Expert System in Acute Hearing Infections in Paediatrics”. She passed the MIR exam gaining admittance into the hospital training program for five years and was awarded the Title of Specialist Doctor in Oral and Maxilofacial Surgery. During this time she spent some months training in very prestigious hospitals in the U.S.A., Austria and France with some of the best specialists in areas like Reconstructive Surgery, Orthognatic Surgery and Facial Structure Deformities. She kept an active participation in many national and international courses and conferences. She also has a degree in Dentistry from the University Complutense in Madrid and during these years she worked at the University of Alfonso X El Sabio, teaching and coordinating the courses Medical and Surgical Mouth Pathology I and II. She was given an Investigation grant to develop her Doctoral thesis which she subsequently defended successfully, attaining the title of Doctor in Medicine and Surgery with the highest qualification: “A” pass Cum Laude. She has given courses and lectures, and is the author and co-author of many national and international articles and papers. She is a member of different Scientific Societies. Nowadays she is the Academic Director of the Universitary Master Course of Dental and Prosthetic Implants at the University of Alfonso X El Sabio, Madrid, and Professor at the University of Zaragoza, and she combines her teaching activities and educational vocation with her private practise in the specialist area of Oral and Maxilofacial Surgery and general Dentistry. 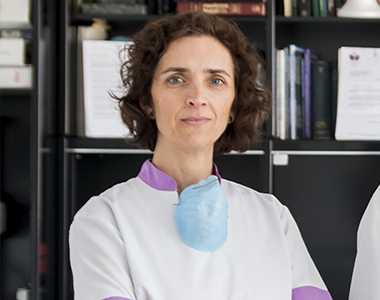 PROF. DRA. SUSANA HERNÁNDEZ MONTERO Doctor Susana Hernández Montero gained her qualifications in Medicine and Surgery at the University of Zaragoza. She also has a degree in Dentistry from the University of Valencia. She was the President of the XXVI National Root Canal Conference. Doctor Susana dedicates herself exclusively to Peripheral and Root Canal Pathology and affected areas and she is member of our Oral and Maxillofacial Surgery Team. She is the Author and Co-author of many papers and publications. She has completed resident studies in clinics specialising in her field of interest. She is also a member of the AEDE. Professor of Dentistry at Huesca University, Spain. 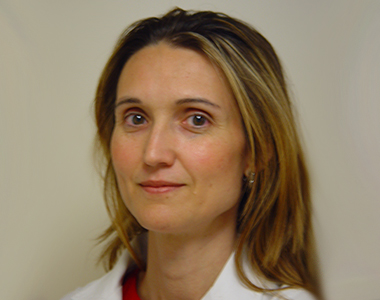 PROF. DRA. ELENA HERNÁNDEZ MONTERO Elena Hernández Montero accomplished her Medicine and Surgery Degree by Zaragoza University between 1992-1998 with brilliant academic records, completing also at this time the Superior Professor of Piano and Chamber Music in the Superior Conservatory of the same city, getting the highest honours. Through the National Opposition system known by MIR, she was trainned in Otolaryngology and Head and Neck Surgery in Miguel Servet University Hospital, between 1999-2003. She has received several scholarships by the Spanish Otolaryngology Society, the Official College of Medical Doctors from Zaragoza and the Spanish Oncology Society to achieve the Doctoral Thesis titled “Epidemiologic, Clinical, Pathologic Prognosis factors in pharyngo-laryngeal cancer stages III-IV following a multimodality approach with Chemo and Radiotherapy”, getting an A with hounours in June 2005. She usually attends many courses, congresses and rotations in prestigious american and british hospitals, being fluent in english language. She is one of the most active and updated young ENT specialist in our country. She has publish different articles in national and international medical journals. She was awarded several times (Best Temporal Bone Dissection, Best Oral Communication in the LVIº ENT Spanish Society Congreso). Nowadays she develops her professional activity in Viladecans Hospital (Barcelona) and García-Ibáñez Otology Institute, being her main interest Otoneurology, Reanimation of the paralyzed face, Rhinoplasty and Endoscopic nasosinusal surgery. She usually is a teacher in the Temporal Bone and Endoscopy Nasosinusal Surgery courses. 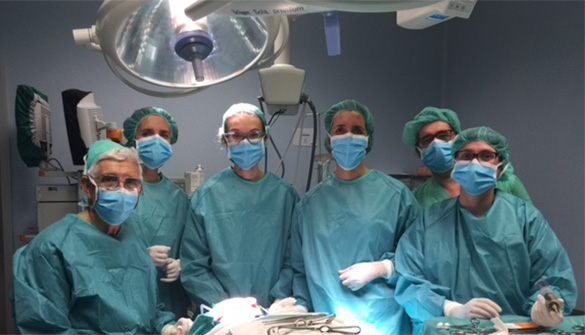 In our Clinic of Dentistry, Oral and Maxillofacial Surgery and Otolaryngology we believe in teamwork. Therefore, we have a group of professionals with extensive experience and a continuous and demanding national and international training. We have a specialized team of nurses, doctors, anesthetists, intensivists and auxiliary personnel allow us to work in a medical environment quality. The best hospitals for our treatments under general anesthesia and / or sedation reinforce our commitment to our patients.

What our patients say

Very warm and caring team. They gave me the best treatment.

State of the art technology and top professionals. Exellent results.

Trust on our experience